It’s rather witty to write a blog meant for students about a children’s play, but War performed by Theater Artemis excellently offers a different way to approach the concept of maturity.  Interesting, because being a student is also about becoming mature. The announcement of War states that this play is a play which is impossible to make: it’s too big, too much, too scary and so on. Actually it’s unthinkable to make a children’s play about war, but Theater Artemis decided to do it anyway. Then, how does this play offer insights on maturity and therefore why do you need to see this play? 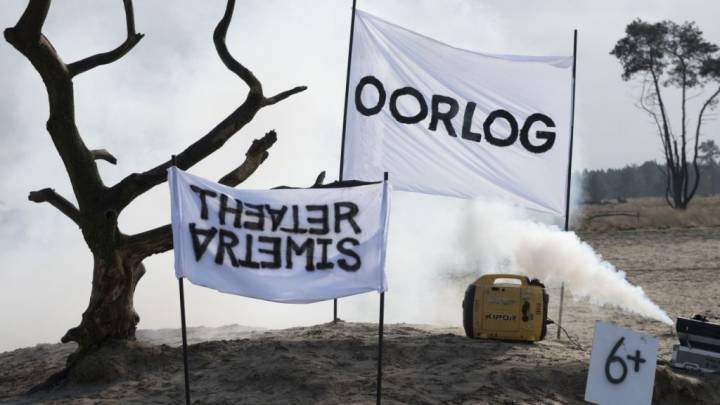 Creating requires a lot of courage, but producer Jetse Batelaan isn’t unfamiliar with making plays which reach beyond the well-known structure of a children’s play. In his previous piece he made the actors stop their acting halfway through; they changed into their normal selves and disappeared off stage. The play wasn’t finished yet and therefore he randomly picked children from the audience and made them perform. Instructions were given through headphones, leaving the rest of the audience unaware of what was to come. He dares to search for new ways of making theatre and in doing so questions conventions and eventually breaks them down.

This producer has the courage to stage remarkable pieces and with War he even dares to stage a non-typical children’s topic. Batelaan acknowledges that even for children war is everywhere and the result shows that he considered how his younger spectators might deal with this topic. War shows that starting a war isn’t that difficult, but ending a war seems rather impossible because nobody wants to loose. Battle after battle has been fought, but the actors get tired of battling over and over again. Finally someone has the bravery to ask the most simple question: “can’t we all be a bit nicer to each other?” Asking this question on the one hand and producing this play on the other hand displays maturity.

The producer has the courage to stage a completely different kind of children’s play and dare to use a theme which isn’t immediately associated with children. He is acting mature by being aware of his knowledge, possibilities and audience; without denying theatre conventions he challenges the spectators’ perspectives. Or, he dares to take another kind of perspective and he has the courage to stage it. As a student about to write your thesis you can use this example to reflect on your topic/ research question. Does this topic suit you? Does it present your point of view? Or else, does it give proof of your maturity? Does the topic demonstrate your expertise but far more, does it show your point of view based on the known theory?

Dare to take on a different perspective within the framework of your study but out of the known way of doing it. That will be the beginning of a brilliant thesis and the start of good future perspectives. In need of inspiration? Then watch War performed by Theater Artemis, Sunday the 19th of March (14.30h) at the Stadsschouwburg Groningen.

Scriptiewijzer guides students while writing their thesis. We work based on the ‘why-theory’ of Simon Sinek; why do you want to write a thesis about this specific topic, what do you need to answer your research question and how are you going to work this out? Scriptiewijzer is part of buro dijkstra. At buro dijkstra we help students and young professionals with finding their way in life. We support courage and consideration in decisions which have to be made and therefore we stimulate acting mature.